Types of Scorpions In Arizona

Types of Scorpions In Arizona

There are four common types of scorpions in Arizona. In this Arizona Scorpion Identification guide we are going to cover how to tell them apart.

There are many types of scorpions that live in Arizona homes because it is the perfect climate for scorpions to thrive in. Southern Arizona is home to the majority of scorpions.

Although, when it comes to scorpions, there is a bunch of misinformation out there online. For example, while their scorpion stingers may contain venom, it is not always dangerous to humans. This is because their venom is for small prey (insects), which are much smaller than humans, and the scorpion venom is not potent enough to do significant damage.

Because of this, death by scorpion stings are very rare.

Types Of Scorpions In Arizona

Below are the most common types of scorpions in Arizona and how you can tell them apart from each other. 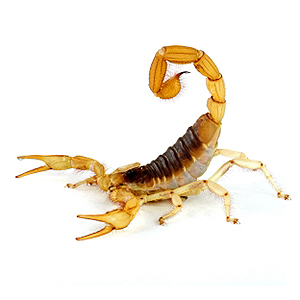 Being one of the more commonly found in the state, the Arizona bark scorpion is easily identified from other types of scorpions. They have long and slender metasomas, which is the tail which holds their stinger. They are yellow-tan in color and have longer arms and fingers. But, when located at higher elevations they can be striped.

When resting their metasoma is resting, it’s positioned at their side in a coil. It is common to find the Arizona bark scorpion in rocky desert regions, but it is the type of scorpion that is usually found by homeowners within Arizona homes. They may be found in and around bark, this is where their name comes from.

The Arizona bark scorpion is also one of the most venomous scorpions located in Arizona. If stung by one, common results are painful swelling and difficulties in breathing and muscle spasms.

Although being stung by an Arizona bark scorpion is not usually life threatening, you should seek medical attention immediately. With a robust and lustrous metasoma, and a dorsal region that is striped and ends in spinoid granule, the Arizona stripetail scorpion is the most commonly found type of scorpion in the state.

Being yellowish in color, the Arizona stripetail scorpion has dark stripes on the dorsal region. They are generally under three inches in length, with females being larger than the males.

The Arizona stirpetail scorpion can often be found under rocks, but can make their way into homes in Arizona as well. Being known as the largest scorpion in the United States, the Arizona giant hairy scorpion can often be identified by size. Also, they have very hairy metasomas, with the likely chance of a hairy pedipalp too.

They get their name due to their size and being the only scorpion in America with such dense hair. They have a unique color too, appendages being yellowish, and dorsal regions being a dark color.

It is more common to find the Arizona giant hairy scorpion within the saguaro forests. They feed on spiders, centipedes, and other types of scorpions. Between these two types of scorpions, the largest difference is that the yellow ground scorpion’s first two metasoma areas are just as wide, if not wider than they are long. Being nocturnal, these scorpions are commonly located in southeastern Arizona.

When it comes to identifying scorpions in Arizona, it helps to know a bit about the most common types, especially if found in your home. However, if you do locate a scorpion infestation, avoid handling it alone.

How To Remove Scorpions From Your Home

If you have a scorpion infestation problems and live or do business in the Scottsdale, Arizona area, A BEE & PEST PRO offers professional scorpion removal in Scottsdale.