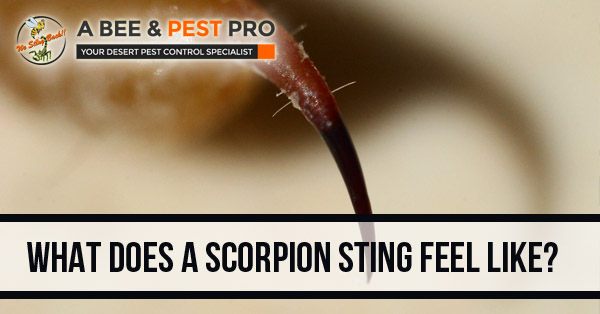 Are you searching for “What Does A Scorpion Sting Feel Like“? If so, A BEE & PEST PRO can help. We put together this article with tons of information about scorpion stings, the risks and pain involved, as well as scorpion sting treatment regiments.

The Scorpions sting is used when capturing their prey, and for defending themselves,but they have to either provoked or threatened before they will sting. Their sting is their means of a defense mechanism and for incapacitating their prey. However, to what strength of toxicity the sting is to humans depend on the type of scorpion species. All scorpions have venom in their sting, which acts as a neuro-toxic in nature.

Does a scorpion bite, or do they sting?

A scorpion will sting, they do not bite, a lot of people refer to a sting as bite, that’s all.

How would I identify a sting?

The scorpion sting can be identified the best by actually seeing it sting or seeing it as it is getting away after stinging.

Is there any specific look of a scorpion sting?

If you get a scorpion sting in the United States the site will usually have minor signs or symptoms, such as redness, skin feeling overly warm at the site of the sting, and pain.

Common symptoms of a scorpions sting:

Here are the common symptoms and signs your have been stung by a scorpion.

Signs You Have Been Stung By A Scorpion

Usually, a scorpions sting (in the United States) leaves the victim feeling signs of warmth around the site of the skin, redness, and pain. However, if someone should get a sting from a bark scorpion their venom can be extremely toxic,and even deadly, especially in children.

Most stings from a scorpion will have symptoms of mild pain, involving tingling and swelling, as well as numbness, at the site of the sting. There are more severe symptoms, which include involuntary movements of the head, neck, and eyes, sweating, drooling, muscle twitching, high blood pressure (hypertension), vomiting, accelerated heart rate, excitability or restlessness, and low blood pressure (hypotension).

A sting may cause a burning sensation or immediate pain, producing swelling and be sensitive when being touched. The signs to look for when one gets a scorpions sting from a bark scorpion are numbness and/or tingling, twitching muscles, or blurry vision.

Hyperactivity, along with erratic eye movement may occur in children when they get a scorpions sting.

Most of the scorpions found in the United States will not be very high in venom toxicity, excluding the Arizona bark scorpion ‘Centruroidessculpteratus. In fact, most of the North American scorpions that someone get a sting from although may be painful, will not usually require any major medical treatment.

Medical specialists today are able to immobilize an effected area that is below heart level, this keeps the venom from being able to spread throughout the body and delays any absorption of poison. The spread of any venom can be limited more by keeping the victim calm, as this will keep their blood pressure and heart rate down.

The risks involved in related infections:

To prevent secondary infections, it is important to keep the sting cleaned and disinfected.

How to tell if your pet has a scorpion sting:

Look for any swelling and/or sensitivity that may be around the site of the sting, this will be of help in identifying your pets encounter with a scorpion.

There are 1,500 different species of scorpions, with only 50 species known to be deadly to humans. These are mostly in the ‘Buthidae’ scorpion family. A scorpion from the Buthidae family have a triangular shaped sternum, seemingly weak pincers, slender body, with a thick, fleshy tail. The sting from this scorpion will be very painful, however, with immediate treatment any infections may be prevented.

If you ever have problems with a scorpion infestation and live in the Scottsdale, Arizona area, feel free to give A BEE & PEST PRO a call today at 480.694.8994.